Bulgarian meat delicacies or what to eat when drinking rakia? 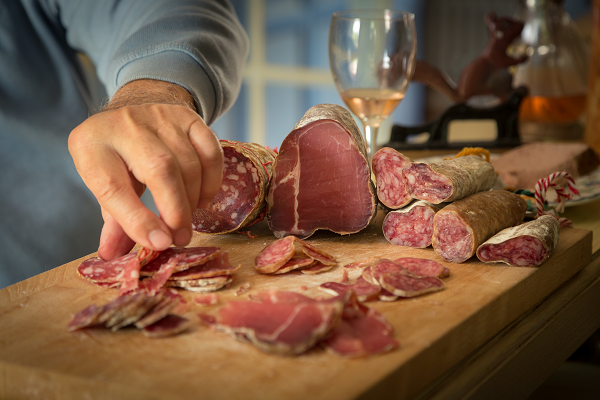 Menu of each Bulgarian restaurant includes a section called “mezeta”, and it consists of snacks that perfectly suit traditional alcoholic beverages - wine and rakia. The most popular appetizer is the meat delicacies platter, different types of which are unique for each region of the country.

We’ve already written about meat dishes in restaurants of Bulgaria. And now it will be useful to remember about all the kinds of sausages and smoked-dried delicacies, which the Bulgarians make perfectly.

Meat preservation methods - salting, drying, smoking - have historical roots, and all the recipes are carefully passed down from generation to generation.

Let's figure out what to order in a restaurant to enjoy the wonderful combination of tastes of meat, wine and rakia, and whether it’s possible to buy it in a supermarket and serve on a holiday dinner table?

All of the above types of delicacies can be bought in stores. The choice is always great, prices are from 10 to 30 euros per kg or:

Popular restaurants of Bulgarian cuisine have their own proven suppliers of meat delicacies, so you can taste the most delicious lukanka right there. Feel free to order rakia and mezeta.

Where to find real steak in Bulgaria?

Meat and meat dishes in the Bulgarian menu. Vegetarians, close your eyes!

Winter holidays in Bansko. How to get there, where to sleep, what to try?